There are a number of benefits to be achieved by swapping the Bendix Road site owned by Howard County with the Marriottsville Road Land Bank site being held by the HCPSS for a new middle school. The Marriottsville Road could be used to construct the new courthouse. However, because this location is not ideal for a courthouse, the property could be sold to finance the purchase of other properties–perhaps closer to the County Detention Center.

Maryland does not appear to have suggested criteria for selecting a location for a courthouse; however other states and federal agencies do have  elements to be considered in site selection. The Virginia Courthouse Facility Guidelines states:

The Virginia Guidelines list other criteria that should be considered. Among these are prominence of the site, proximity to other public buildings, and ease of public access.

Prominence of site.  A courthouse on Bendix Road will have no prominence. The building will NOT be visible from Route 108. It is tucked away behind other buildings and treed lots.

It is this lack of prominence that helps make the site well-suited for a middle school.

Ease of public access. The primary access to the Bendix site is from Route 108. The secondary access is an indirect route past homes in the Columbia Hills Meadowbrook Farms neighborhood. The residents would probably not welcome traffic cutting through the neighborhood from the Meadowbrook Park along 100 to get to the courthouse. Yet, such traffic from their own neighborhood would be welcome to go to a nearby middle school.

At nearly 29 acres, the Bendix site meets the requirements of an 800-900 seat school. Located in the southeast corner of the Northern Region it meets the need expressed in the Feasibility Study to “ultimately relieve crowding in the Northern and Columbia West Regions.” The location along the Route 108 Corridor, is well-suited to serve neighborhoods currently attending Harpers Choice and Wilde Lake Middle Schools. This will free up seats to accommodate the growth in Downtown Columbia. 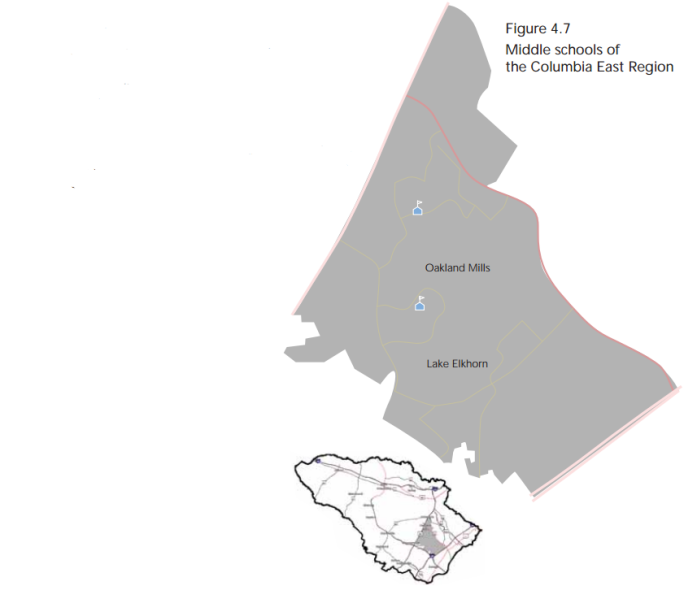 On the other hand, the Marriottsville Road land bank site held by the HCPSS in the northeastern end of the Western Region is not adjacent to the confluence of the Northern, Northeast, Columbia West and Columbia East Regions where the major growth is occurring. The Marriottsville Road site also does not meet the requirements of Policy 6000 with its elongated and extreme shape with an approximately 100 foot wide choke point in the middle of the parcel. While the parcel is listed in the Feasibility Study as 41 acres, it is really two parcels of approximately 13 and 28 acres divided by the choke point. The site also has a hilly topography and wetland and drainage issues especially along the Marriottsville Road side.

Swapping the Bendix site is not a new idea. In 2004, County Executive Robey considered a proposal to sell the Dorsey Building to help finance the construction of a new courthouse.  Constructing a middle school on Bendix Road and selling the Marriottsville Road property could be the best verdict for the HCPSS and Howard County and a new courthouse.

Every day our so-called President and his staff say something totally untrue.

Yesterday, he said that the murder rate is at an all-time high. It is not. It is at a near all-time low.

The White House released a list of 78 so-called terrorist attacks that they alleged did not receive media coverage–most did get wide coverage.. The list included the Pulse Nightclub, the Nice truck attack, and the San Bernardino shooting–a shooting which the so-called President used to justify his original total and complete ban of Muslims entering the United States in 2015. Also on the list are incidents that were not terrorist attacks.

When a government uses alternative facts–lies–as truth there is no possibility to have policies that meet the actual needs. Instead we will have policies to fix non-existent problems. Wack lies give wack policies.