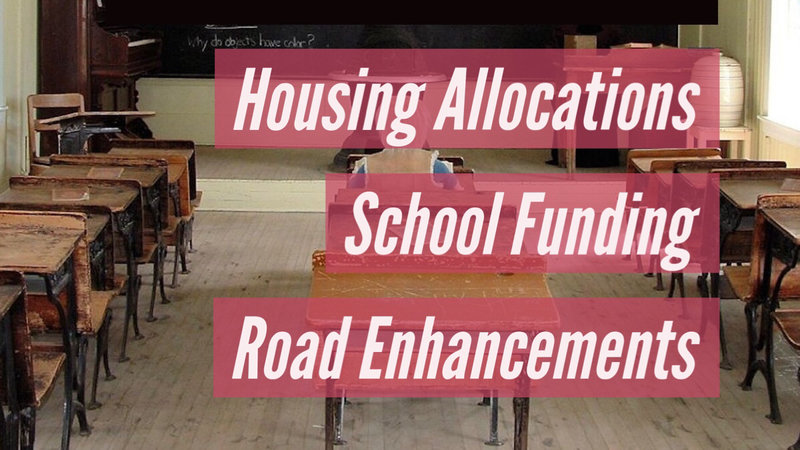 This overcrowding has occurred to the extent that some schools are close to 140% over-capacity.

For 30 years, the school system has dealt with overcrowding by adding portable trailers for classrooms. Currently, there are 224 portable classrooms.

The County manages growth through the adequate public facilities ordinance (APFO). The school overcrowding occurred because the school-capacity standards do not prevent overcrowding.

The County Council has introduced legislation that will help the County manage growth better by making the capacity standards stronger.

According to the County’s own reports, developers pay an average value of $5,138 PER UNIT to build a new home.

The fees are not market-based. Neighboring counties charge five to six-times the fees charged by Howard County with stronger school capacity standards.

In order for the County to raise these fees, it needs to obtain State-enabling legislation to pass in Annapolis.

This bill is introduced by the Howard County State Delegation. The bill as introduced does not allow the County to charge market-based surcharge fees. It also allows overcrowding in schools provided developers pay a fee.

Let your State Delegation know that you want the County to stop subsidizing developer profits. Further, this bill introduced by the Howard County State Delegation needs to be changed to enable the county to charge developers market rates so every additional child has a permanent seat rather than allow overcrowding for a fee.

Pass the State-enabling bill that will allow the County to charge market-based rates and prevent overcrowding.

Why would these properties along Route 100 and Old Montgomery Road not work for high school #13?

And if it is not good for a high school, how about for the new  courthouse?

Houston, we have a problem.