Perhaps the proponents of CB17-2015 intended that each vending machine have 75% healthy items or maybe each collection of vending machines.  But the Bill is less than clear on this issue.  Seventy-five percent could be interpreted as all the machines across all of the Howard County properties.  So that some machines may have only 50% healthy options, but others will have 100% to get a total of 75% healthy items.

If “offerings” means SKUs then it is possible that each machine could meet the requirements of the Bill by having 75% of the offerings representing healthy options while only being 50% of the choices at the machine.  Consider a machine with just buttons as discussed earlier in Will CB17-2015 Ban Certain Types of Vending Machines?  The bill requires 50% of each row to be healthy.  Water must be offered too.  Lastly, no more than 33% of the total offerings may be diet drinks.  So the buttons could look like this:

Now consider this arrangement without the regular Coke.

Here there are seven offerings.  Six of the seven or 85.7% are healthy.  Only one of seven or 14% are Diet Coke offerings yet they occupy 50% of the buttons.

These are yet other ambiguous and unintended consequence of the drafting of CB17-2015.

Based on an analysis of data provided by Howard County (HoCo Vending Machine Locations and Income), it appears that purchases from vending machines have little impact upon many individuals or the population of Howard County as a whole.  The gross sales of $147,181 is just too small to have an impact upon the health of Howard County.

The data provided by Howard County is somewhat incomplete and ambiguous.  Some listed locations are not listed in the sales data.  Some buildings have different names on the two lists.  Some buildings such as the District Court and the Ascend Building are surprisingly missing.  Whether the vending machines at the Robinson Nature Center were in place a full year is not known, or whether it really has sales of only one or two items a day.

With most items costing about a dollar, it seems that roughly 147,000 items were sold.  The data shows that some machines only have a sale a few times an hour on average or some just once or twice a day.  The Department of Corrections is the most busy and has the most sales.  It accounts for nearly one-third of the gross revenue for the County.

Some opponents of CB17-2015 argued that the Bill would adversely affect the small businesses vendors of the machines.  Based upon the available data, providing vending services to Howard County seems to be a losing business anyway.  After paying a 35% commission to the County, 50% or more for the food, and  6% sales tax, there is only 9% left to pay for labor, vehicles, fuel, insurance, overhead, and the cost of the machines themselves.  (The current contract can be found here). Approximately $13,000 is not very much for these expenses.  If anyone has better data, I’d like to consider it here.

There is a lot of misinformation about CB17-2015.  The opponents claim that it bans nonhealthy food options in vending machines.  Executive Kittleman claims that it infringes employee free choice.  As seen in previous blogs, CB17-2015 actually does not say what it’s proponents intended. Non public, employee-only vending machines are not subject to the Bill.  The Bill purports to require only healthy packaged foods for youth programs; but the flawed language of the Bill actually excludes nuts, seeds, fruits and vegetables from the list of healthy options.

Lost in all the discussion is not that it bans certain products from vending machine, but that the bill might implicitly ban certain types of vending machines.

The applicable provision of CB17-2015 states:

This section implies that all vending machines look like this with all the actual items for purchase are on display.

But what about a vending machine with just buttons?  While healthy items can be shown on each row of buttons on this type of machine

and on this type of machine, this is not always so easy to do.

For vending machines that rotate, when is the item considered “on display”?  If only half of each row are healthy, there will be times when the nonhealthy options are displayed depending upon the rotation of the items.

How are healthy items to be listed on each line of a menu on a hot beverage machine, such as this one from the current Howard County vendor?

And how do these types of vending machines comply with the requirement that each row is one-half healthy options when there is only a vertical column of buttons? 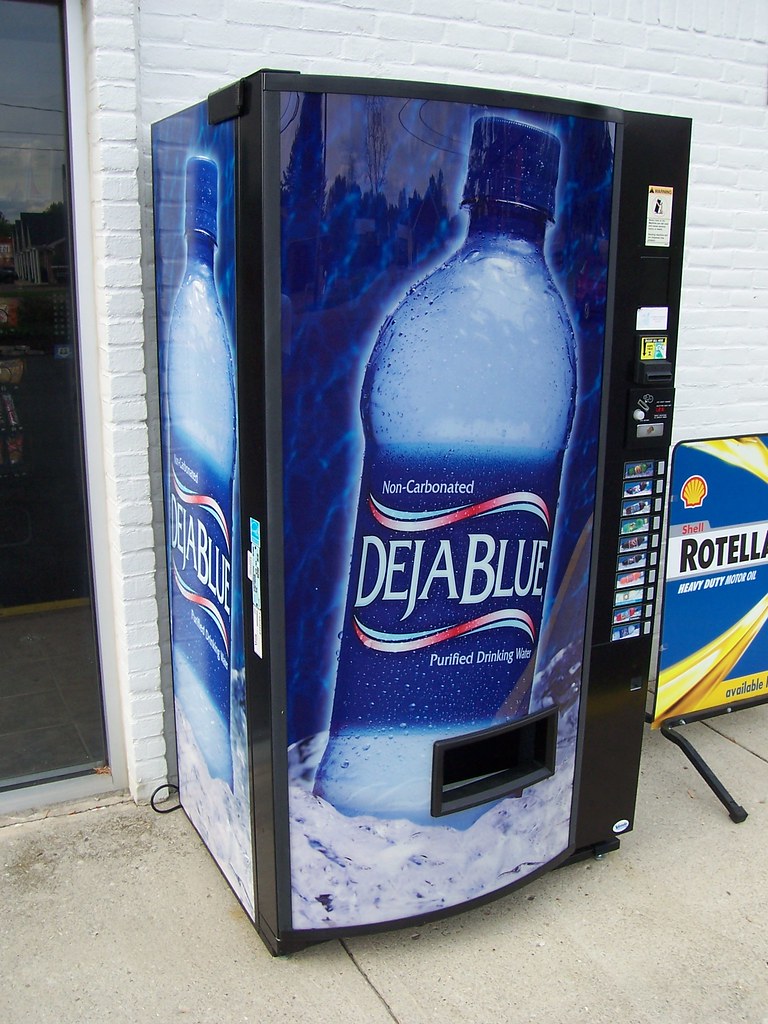 So while Councilman Ball says “If you want a Coke, you can have a Coke. If you want water, you can have water,” how are Coke machines with only vertical buttons going to meet the requirements of the horizontal display rules?

Banning certain types of vending machines seems to be one of the many unintended consequences of the poorly drafted CB17-2015.

Careless drafting by the Howard County Council has caused the list of healthy food options in CB17-2015 to be quite nutty and in fact generally nutless. At best the language is ambiguous; at worst it excludes the very food items which the proponents of the bill sought to include as healthy options. When the Council passed Amendment 1 to the original Amendment 1 which Councilman Ball stated was intended to restore “100% nuts or seeds” to the list of healthy food options, they actually did the exact opposite.

This blog took several days to write and consider and then rewrite.  One needs to read these provisions with an open mind.  The brain tends to fill in the missing language to fulfill the intent of the bill.  However, the actual language of the provisions do not match the intent.  Having watched the Council debate, spoken with Councilman Ball’s assistant and read the Baltimore Sun editorial, there is a belief that the language actually permitted nuts and seeds.  Yet, this is not really what the provision states.

To understand the issue, one needs to carefully read the applicable provision:

The same can be said for the exception in d(5).  Nowhere does it say that milk, fruits and vegetables are healthy options.  It actually carves milk products, fruits or vegetables out of list of healthy options–period.

Consider for a moment a provision which says that “the Council shall meet on no more than 20 days on the 1st and 4th Monday, except if the building is closed for a holiday or snow.”  The exception says that there is no meeting on holidays or snow days–period.  Also consider the common rule for the Council and boards in Howard County that “a person shall speak for no more than 3 minutes, except if they are a representing a group.”  This language by itself says if you are representing a group a person cannot speak at all.  Of course this is not really the rule because the provisions have the additional language “in which case the person may speak for no more than five minutes.”  For another analogy, consider a requirement that says that “the  building shall be open from 9 am to 5 pm each day, except for Sunday.” This means that Sundays are not included in the days that the building is open; the building is closed.

The healthy food option exceptions are missing the additional language that nuts and seeds are considered healthy options with language such as “which may have up to fifty percent calories from fat.”  When the USDA drafted the Smart Snack in Schools standards, they used a different structure for the exceptions by clearly explaining the exemption in a separate subsection and not in one clause: “Nuts and Seeds and Nut/Seed Butters are exempt from the total fat and saturated standards, but subject to the trans fat, sugar, calorie and sodium standards.”  §210/11 (f)(2)(ii).  The bill’s shorthand attempts to make the exemptions in subsection (d), do not legally identify the intended healthy food options.

Moreover, interestingly the 100% nut or seed provision paradoxically allows for items with 90% or 95% or 99% nuts or seeds to be considered a healthy option.  An item with 100% nuts or seeds excludes not only items like trail mix from the healthy list, which the Council discussed, but also excludes any nut or seed product with added preservatives, sodium or spices because then the product with any additional ingredients would not be 100% nuts or seeds.   Thus, rather than encouraging healthy nut or seed items, the 100% provision actually encourages less healthy products.

Clearly, the language in the bill does not reflect the intended result.  Perhaps it would be best to allow the veto to stand and start over with a bill which adopts by reference other more well-drafted food codes such as the “Smart Snacks in Schools” standards.  This would also address Executive Kittleman’s objection to codifying food standards into the Howard County Code by referencing the rules adopted by the USDA.

In vetoing CB17-2015, County Executive Kittleman  stated that “the actual impact of this legislation will be minimal” and that it only “provides lip service to the issue of improving health outcomes.”  Due to poor drafting and flaws it appears that Kittleman did not realize just how true these conclusions were; the many loopholes in the bill could cause it to have little actual effect on either the employees, the public or the youth of Howard County.

Councilman Ball’s original bill had numerous flaws.  It had a $0.25 pricing differential for “healthy” beverages which could have had the practical effect of actually encouraging smart shoppers to choose the unhealthy supersized version.  The rules for all packaged goods would seemed to have applied to the commissary at the jail requiring healthy snacks and candy.  How many prisoners would have selected puffed rice and seeds over chips and candy?  The packaged food rules could have been interpreted to apply to the chips and snacks sold at the Subway restaurant at the County owned Long Reach Village Center. Ball’s Amendment 1 corrected many of these flaws, but many loopholes remain.

Second, the definition requires “insertion” for payment (or optional manual operation).  When people use a credit card to purchase gas, the credit card is often inserted and removed quickly.  However, when using a credit card at most grocery or department stores, the card is swiped and not really inserted.   So a vending machine with a insert and remove quickly mechanism would fall under the definition, while a swipe type payment would arguably not apply. Regardless if it is interpreted that “swiping” amounts to “insertion” of a credit card, machines which only accept payment by tapping a credit card like the Metro SmartTrip Card which is used at some gas stations or McDonald’s would not be subject to the definition.

Lastly, machines which only accept payment by smartphone would not apply either.  So savvy vending machine vendors can actually attract millennials and other young people with their smartphones to their unhealthy vending machine which was the opposite intent of the bill.

Discussion of more flaws and loopholes in “vending machines” to come.